1st Muharram: Imam Hussain Is Stopped From Going To Kufa

The following blog is created through the research work done by/under the supervision of Sayed Muhammad Baqer Qazwini for #WithHussainInKarbala, the first-ever Twitter-based Maqtal. It can be viewed on this link.

Departing from Mecca, Imam Hussain gave an eloquent and magnificent sermon on how death is a reality waiting to happen. He said,

He called on people to join his cause and said:

“Whoever wants to meet Allah after getting martyred in our way should prepare to accompany us. God Willing, we will depart from here tomorrow morning.“

The next day, the day before the annual pilgrimage (Hajj), Imam Hussain left Mecca with some fifty men and his family. The caravan hadn’t travelled far when the news of the martyrdom of Muslim Bin Aqeel and Hani Ibn Urwa reached Imam. Imam Hussain’s stance was unwavering; he revered the efforts of Muslim and Hani, saying that they had fulfilled their promise to Allah and had done their duty. It was now time for the others to do the same.

The caravan travelled for 21 days and 21 nights and included his companions and family, including women and children, and even his infant son, Abdullah al-Razi (Ali Asghar). With courageous faith and exemplary patience, the caravan kept moving forward–towards Kufa.

The Encounter with Hurr

Imam Hussain was only several miles away from Kufa when an army under Hurr ibn Yazid al-Riyahi stopped the caravan from proceeding any further. When Imam Hussain (a) saw the faces of Hurr and his massive army of 1,000 soldiers, he realized they were thirsty. Imam Hussain asked his companions to give them water and even spray their horses so they can cool off.

At noon, Imam Hussain wanted to pray with his companions. He told Hurr: “I will lead my companions in prayer now. Do you want to lead your companions?” Hurr said, “No, we will all pray behind you.“

After the prayer, Imam Hussain addressed Hurr and his army, he said:

“O people, if you become God-conscious and know to whom the truth belongs, then this would be more pleasing to Allah. We, the Ahlulbayt, have a greater right to this affair than those oppressors who have claimed it to themselves. If you reject us, deny us our right, and your mind is different than the letters you sent me, then I will leave.”

Hurr said to the Imam: “I swear by Allah I don’t know what these letters are.“

At this point, Imam Hussain ordered his companions to open the sacks and take out the letters and present them to Hurr and his army. Upon looking at them, Hurr said: “We weren’t the ones who wrote these letters, and we have been commanded not to leave you until we take you to Ubaydullah ibn Ziyad.”

Upon hearing this, Imam Hussain said to him: “Death is more within your reach than that!“

Imam Hussain then ordered his companions to pack up and leave. Hurr disallowed him to proceed to Kufa or go back to Medina. He instructed Imam to go to another nearby place until he informs Ibn Ziyad and receives instructions from him. The caravan thus started moving North towards an unchartered territory.

These initiatives by Thaqlain are not possible without your support! Be our Monthly Patron to help us keep going!

Omar Ibn Saad was leading the army. He sent someone to the Imam enquiring why...

Imam Hussain had prepared a special banner for one of his companions who was about... 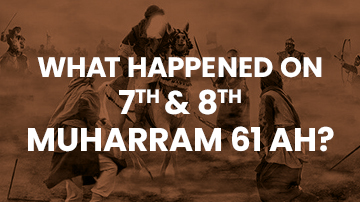 6 Comments
There are some cookies🍪 on Thaqlain
To make your experience better, we use technologies and tools that work using cookies. They allow us to analyze and improve your experience on this site while 3rd party tools use them to show relevant ads to you. You may accept or customize the cookies you want us to use.
Manage options Manage services Manage vendors Read more about these purposes
Let me choose
{title} {title} {title}